Booze, bullying, and moral panic: The temperance election of 1926

In the mid-’20s, Ontario voters had one thing on their mind: Should the province stay on the wagon?
By Jamie Bradburn - Published on May 09, 2018
Political cartoon from the November 15, 1926, edition of the Mail and Empire.

​This is the third in a series of articles detailing the elections that shaped Ontario.

Voters cared little about party allegiance during the 1926 provincial election. The only question of any real importance was: Wet or dry?

Premier Howard Ferguson’s promise to replace the Ontario Temperance Act with tight government control over alcohol sales had initially been seen as potentially disastrous for the Conservative party — voices in favour of prohibition were loud and aggressive. But, unlike his opponents, Ferguson had a better sense of how Ontario was changing during the 1920s and of the ways the OTA wasn’t working. 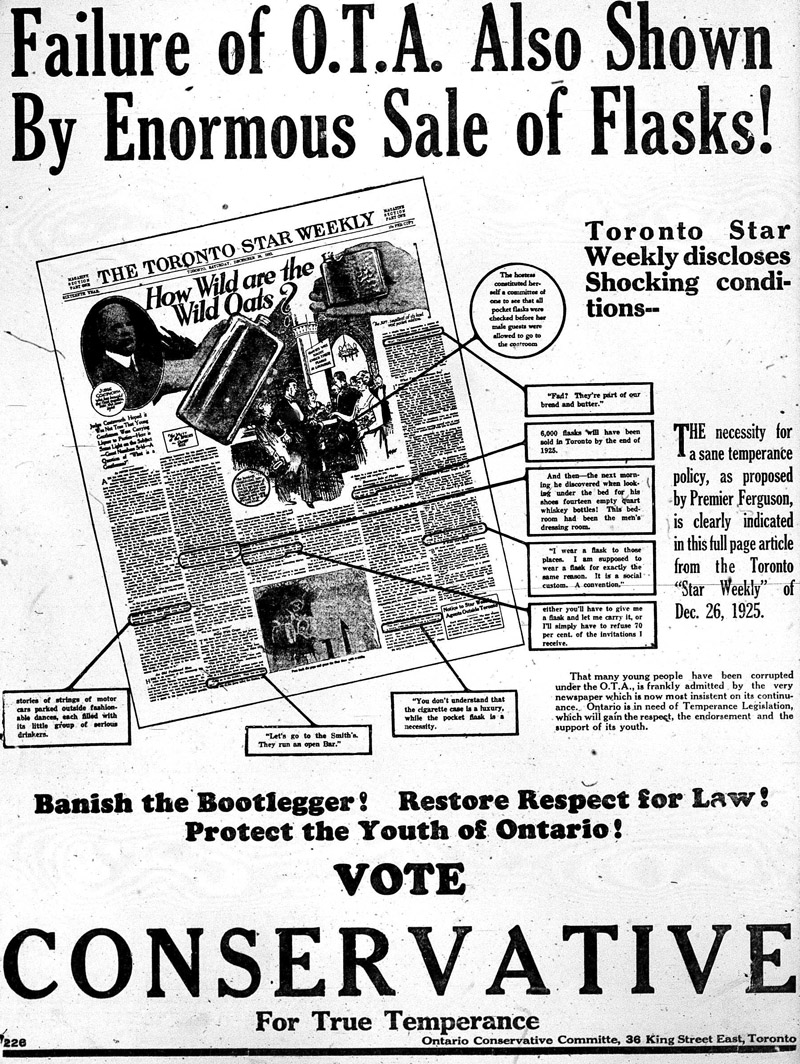 Ferguson had rebuilt the Conservatives after becoming party leader in 1920. Initially seen by opponents as free-wheeling and corruptible, he was praised for providing competent, efficient government after becoming premier in 1923. “However convivial and easy-going he might appear,” notes biographer Peter Oliver, “he was undeniably an establishment figure, a lawyer, a Tory, an Anglican, an imperialist, one who moved easily in the seats of the mighty and was, eventually, accepted totally by the society of his day. Despite his reputation, those who mattered finally realized that beneath the surface Ferguson was a diligent, hard-working, and thoroughly reliable spokesman for the things that were important to them.” 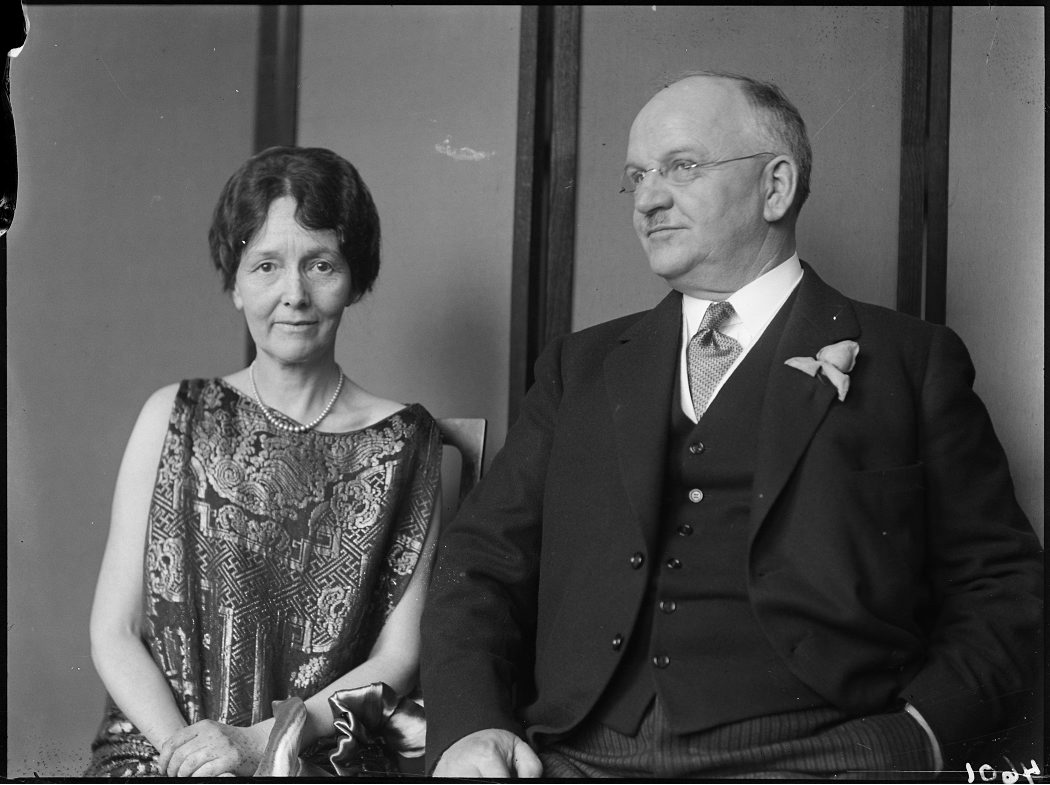 By the mid-1920s, Ferguson had begun to sense that the OTA had outlived its usefulness. The act, introduced in 1916, prohibited the sale of most forms of alcohol, although exceptions were made for cases of medicinal use, for some wines, and for beverages whose alcohol content was below 2.5 per cent, which was the legal definition of an intoxicating drink. A referendum held in October 1924 upheld the law, but by a narrow majority. In urban areas, voters supported its repeal. Ferguson’s response was to raise the strength of legally permitted beer from 2.5 per cent alcohol to 4.4 per cent — the beverage soon became known as “Fergy’s Foam.” Most of the provincial law enforcement budget was dedicated to combatting OTA violations, including bootlegging. As surrounding provinces eased their alcohol restrictions, it became harder to crack down on illicit trade. There was an alarming increase in deaths from alcohol poisoning. Local drunk tanks weren’t emptying. The number of medical prescriptions for alcohol increased, even as the government reduced the number that doctors were allowed to hand out. The emerging youth culture of the Roaring Twenties embraced hip flasks and speakeasies. As Ontario’s cities grew, so did the rural-urban divide over temperance. And there was the temptation of all the tax revenue that would be forthcoming if booze became legal again. 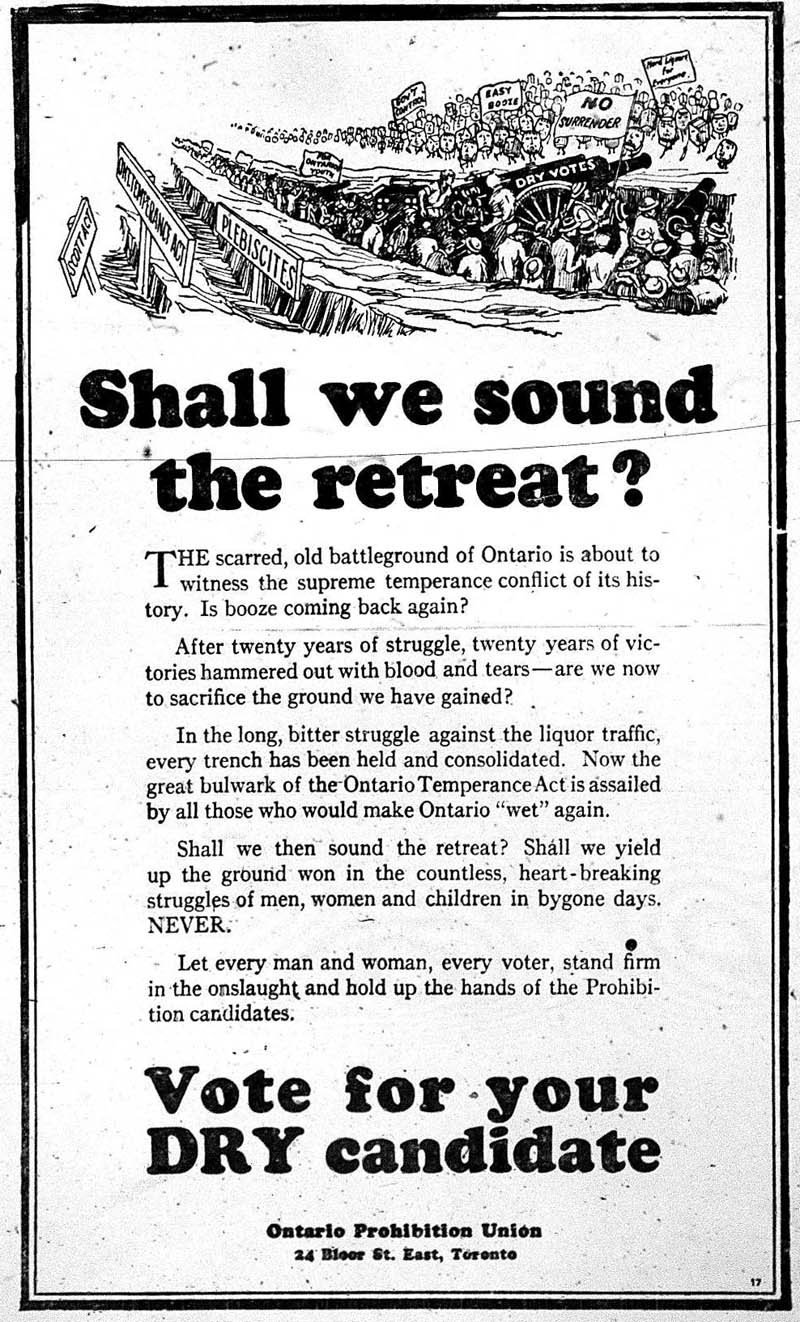 “After a careful survey of the whole Province,” Ferguson declared in an election campaign pamphlet, “with particular reference to our social and industrial activities, and giving long and earnest thought to this difficult problem, I am convinced that from the standpoint of the moral well being of the people our methods can be improved.” He proposed that a new commission oversee alcohol regulations, including the issuing of personal permits, the operation of government stores, and the enforcement of laws designed to discourage drinking. Ferguson called his vision “an advanced temperance policy.”

When Ferguson called the election on October 18, he lost several pro-temperance candidates and party workers. Attorney-General W.F. Nickle submitted his resignation, believing that the party’s alcohol policy would “inevitably, if the people approve, lead to disaster in which I did not care to share.” Nickle then ran as an independent candidate in his home riding of Kingston. Ferguson amended his proposals to keep wavering supporters on board and made small concessions to temperance advocates: for example, he dropped a promise to allow the sale of beer by the glass. He promoted the Conservatives’ long temperance record and pointed out that the drys emphasized enforcement rather than public education.

Supporters of temperance attacked Ferguson with near-pathological zeal. He was demonized for blocking Ontario’s progress toward a moral utopia. Ads compared the fight for temperance to the horrors of trench warfare. Dry newspaper editors framed the election as being poised to decide, in the words of Kingston’s Daily British Whig, “the greatest issue that has ever been placed before them.” Story after story listed the evils of alcohol and the threats it posed to Protestant public morality, and claimed that Ferguson was a tool of liquor interests. Toronto Daily Star publisher Joseph Atkinson was so offended by the attempt to kill the OTA that the paper donated $5,000 to the Ontario Temperance Federation, and he personally donated considerable sums to Ferguson’s opponents. Every day, the paper ran an editorial blurb declaring that the “Ferguson government can’t be trusted.”

Benefitting from $5,000 worth of Daily Star money was the Progressive Party, which had been created two years earlier and was made up primarily of former legislators from the United Farmers of Ontario. Progressive leader W.E. Raney accused Ferguson not only of betraying promises to uphold temperance policy, but also of “defying the constitution of the province and the traditions and well-settled policy of the Conservative party” by not holding another official referendum on preserving the OTA (even though such a referendum was not legally required). 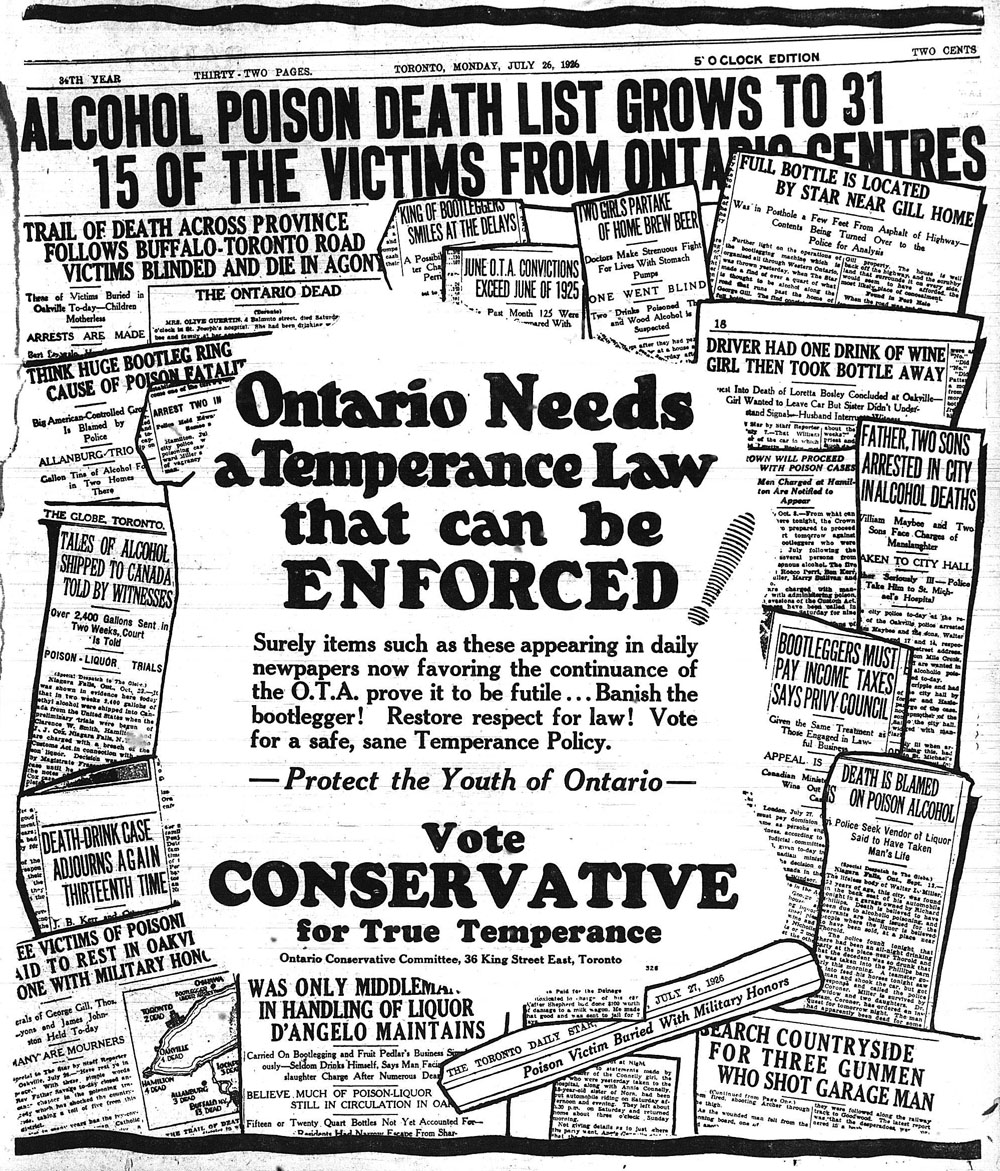 Raney proposed that the Progressives and the Liberals work together to support one dry candidate in ridings where the two might otherwise split the vote in favour of the Conservatives. Under the weak leadership of Oshawa lawyer W.E.N. Sinclair, the Liberals ran an uninspiring campaign in a limited number of ridings. Several Liberal candidates who supported alcohol reform broke away from the party and ran as “Independent Liberals.” Raney and Sinclair’s shared obsession with temperance led Toronto’s Mail and Empire newspaper to call the opposition parties “the most helpless bunch that ever attempted to present a front in a Canadian election.”

The public didn’t buy the hysteria over the evils of Ferguson or of alcohol. The Conservatives emerged from the December 1, 1926, vote with 75 of 112 seats — nearly the same amount they’d won during the previous election three years earlier — and a then-record 56 per cent of the popular vote. Nickle’s pro-temperance campaign failed to sway Kingston voters. “We have today a verdict which represents sound intelligence, deliberate thought of all the people of the Province of Ontario,” Ferguson noted after his victory. “The result of today’s vote will, I think, do a great deal to promote law observance and better conditions hereafter.” Within a year, the OTA was dead, and the first LCBO stores had opened. By the mid-1930s, to the horror of hardcore drys, barrooms had returned, although they were forced to operate under strict conditions.

“The lesson of yesterday’s election,” the Kingston Whig-Standard observed, “is that the people of Ontario have definitely come to the conclusion that temperance is not to be achieved either by criticism or by coercion.”