ANALYSIS: Whoever you blame for the mass closure of Ontario’s newspapers, John Miller sees no reason for hope
By John Miller - Published on Nov 29, 2017
Thirty-four of Ontario's community and commuter newspapers will close after an asset swap between Postmedia Network Inc. and Torstar Corporation. Dozens of other titles remain vulnerable. (Nathan Denette/CP)

When the six employees of the Barrie Examiner arrived at work Monday morning, they found the doors locked and a sign saying “This location is now closed.” The paper, founded in 1864, has seen its paid circulation fall below 2,000 copies in one of the fastest growing communities in Canada.

In Cobourg, a town that has had its own newspaper since 1831, employees got the same message. The door of the daily Northumberland Today was shuttered and a similar sign was posted on it.  Their editor had worked all day Sunday to produce a paper that never hit the street. 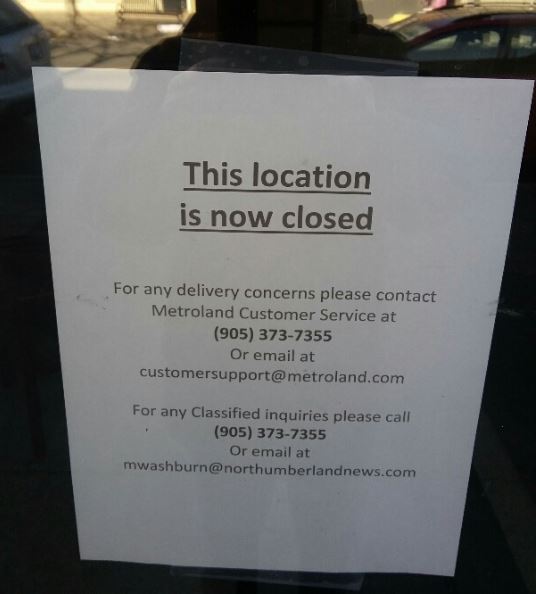 At Northumberland Today’s defunct website, you can still read the quaint dream of R.D. Chatterton, who founded its predecessor, the Cobourg Star, 186 years ago: “Though its ray may not be so bright, or its orbit as large as some … it is hoped it will always afford to the pursuit of knowledge and the paths of truth, a steady and attractive light."

That dream was dashed when Postmedia Network Inc. and Torstar Corp., announced a swap involving 41 publications, and simultaneously said they would close (or plan to close) 36 of them. Thirty-four of the titles are in southern Ontario, one in Winnipeg, and one in Vancouver. Gone are 291 jobs, saving each company between $5 to $7 million annually. Neither publisher indicated plans to hire for its surviving papers.

The timing may have been coincidental but the irony was cruel: When the country’s two largest print media owners decided to carve up Ontario and cut their losses, they did it on Cyber Monday, the day that online advertising tallied all-time record sales.

If you’re looking for a villain, blame the newspapers’ failure to stop the siphoning of readers and advertisers to faster and more sophisticated online rivals like Google and Facebook. Of the $5.5 billion spent on internet advertising in Canada in 2016, an estimated 72 per cent went to Google and Facebook, according to the Canadian Media Concentration Research Project.

No wonder why neither of the country’s largest newspaper publishers could make a daily work in Barrie, a city of 141,000 with a healthy growth rate.

Struggling under these external pressures, the two companies are closing papers in places where they competed, so that advertisers in the affected markets will have one remaining option instead of a choice between one company or the other. In effect, the trade resulted in Canada’s two largest newspaper publishers carving out exclusive print advertising zones in Ontario. For example, in Ottawa, the overwhelming option for print sales will be through Postmedia. The same is true for Torstar in the Niagara Peninsula, and in communities north of Toronto.

One newspaper observer called it a classic “crash and burn” tactic to eliminate competition. April Lindgren, journalism professor at Ryerson University, is among those who lament that no local buyers were sought for the papers that were closed. “They simply traded them off and are making sure they’re dead.”

If this deal had been announced 30 or 40 years ago, it would have prompted a royal commission. Much of the impetus for the creation of the Kent commission in 1980 was the virtually simultaneous closure of two major daily newspapers, the Ottawa Journal (owned by the Thomson Corporation) and the Winnipeg Tribune (owned by Southam Inc.). These closures gave each chain a monopoly in the two markets, Southam with the Ottawa Citizen and Thomson with the Winnipeg Free Press. The resulting allegations of collusion prompted nation-wide hearings and a series of recommendations that the federal government never acted upon.

In this case, John Boynton, president and chief executive officer of Torstar Corporation, justified the transaction using corporate bafflegab about “increased geographic synergies.” His counterpart at Postmedia, Paul Godfrey, was more candid: “Today, sadly, points out there is a crisis in Canada. The alarm bells should go off.”

With or without a growing population, retrenchment and shrinkage have become the norm in the Canadian newspaper industry. Although she acknowledged this week’s closures are shocking in their scope, Ryerson’s Lindgren said they were hardly unexpected. She has spent the last two years tracking Canadian news mergers and closings. More than 150 communities across the country have been affected and are considered “news poverty areas.” Lindgren and her researchers have documented 234 closures of media of all types — 70 per cent of them community newspapers published fewer than five times a week. Twenty-nine of the 36 newspapers closed in the latest transaction fall into that category.

Lindgren said newspapers often fade gradually before they are shuttered altogether. Many of this week’s casualties were starved of staff for many years and produced less news of substance. The reading public might not notice this right away, but the loss can erode the character of local democracy.

“You don’t know what you’ve got till it’s gone,” Lindgren said of the vanished local newspapers. “Until the day you find out they’re building a four-lane highway across from your house and you wonder why no one told you about it.”

(It’s not just community newspapers that are being starved of resources: Staffing levels were so lean in the Postmedia empire that the 24Hours free dailies closing down in Vancouver and Toronto had only one employee between them.)

Perhaps local journalism has indeed been starved by profit-hungry absentee corporate ownership. Or perhaps communities have simply drawn away from newspapers in favour of quick hits on the internet. It’s likely both things are happening at the same time. In any event, no one seems to be able to stop it.

The federal Competition Bureau will review the deal. Postmedia erroneously said the transaction is not subject to merger notification provisions of the Competition Act and does not require regulatory clearance. The Competition Bureau, however, has confirmed it will look at whether the deal would result in a substantial loss or prevention of competition.

The Postmedia-Torstar swap resembles earlier deals made in British Columbia between Black Press Ltd. and Glacier Media Inc. The pair traded more than a dozen papers in B.C. communities over the past five years, concentrating ownership of multiple publications in a single community. Many of the papers were subsequently closed, and the Competition Bureau did nothing to stand in the way.

As newspaper owners scramble to make the transition from paper to digital, there is little to suggest that their efforts will succeed, meaning the erosion of local news operations will probably continue.

That boat has sailed, and smaller newspapers reacted too slowly to make it aboard. For staff at the newspapers that Postmedia failed to offload in its latest deal — the company still owns 19 small community dailies and 63 community weeklies or semi-weeklies — the future looks grim.

Society
Toronto’s housing crisis is costing us all billions. Does city hall care?
OPINION: A new report from the Toronto Board of Trade estimates the costs of the city’s housing shortage. The numbers are overwhelming — but so is council’s dedication to the status quo.
John Michael McGrath