Nationalism, xenophobia, and insults dominated the race in 1917 — and divided the city of Kitchener
By Jamie Bradburn - Published on Dec 18, 2017
Patriotism had been a pressing issue in Kitchener since the outbreak of the First World War. (City of Toronto Archives)

​When Prime Minister Robert Borden came to Kitchener for an election rally on November 24, 1917, the local press was thrilled. “This is certainly a red letter day in the history of the city and the riding,” the News Record proclaimed, “and a glorious opportunity for all to hear the great statesman speak upon the vital issues of the hour.” While the evening was indeed momentous, the rally and its fallout were anything but glorious, exposing divisions that contributed to one of the ugliest federal election campaigns in Canadian history. 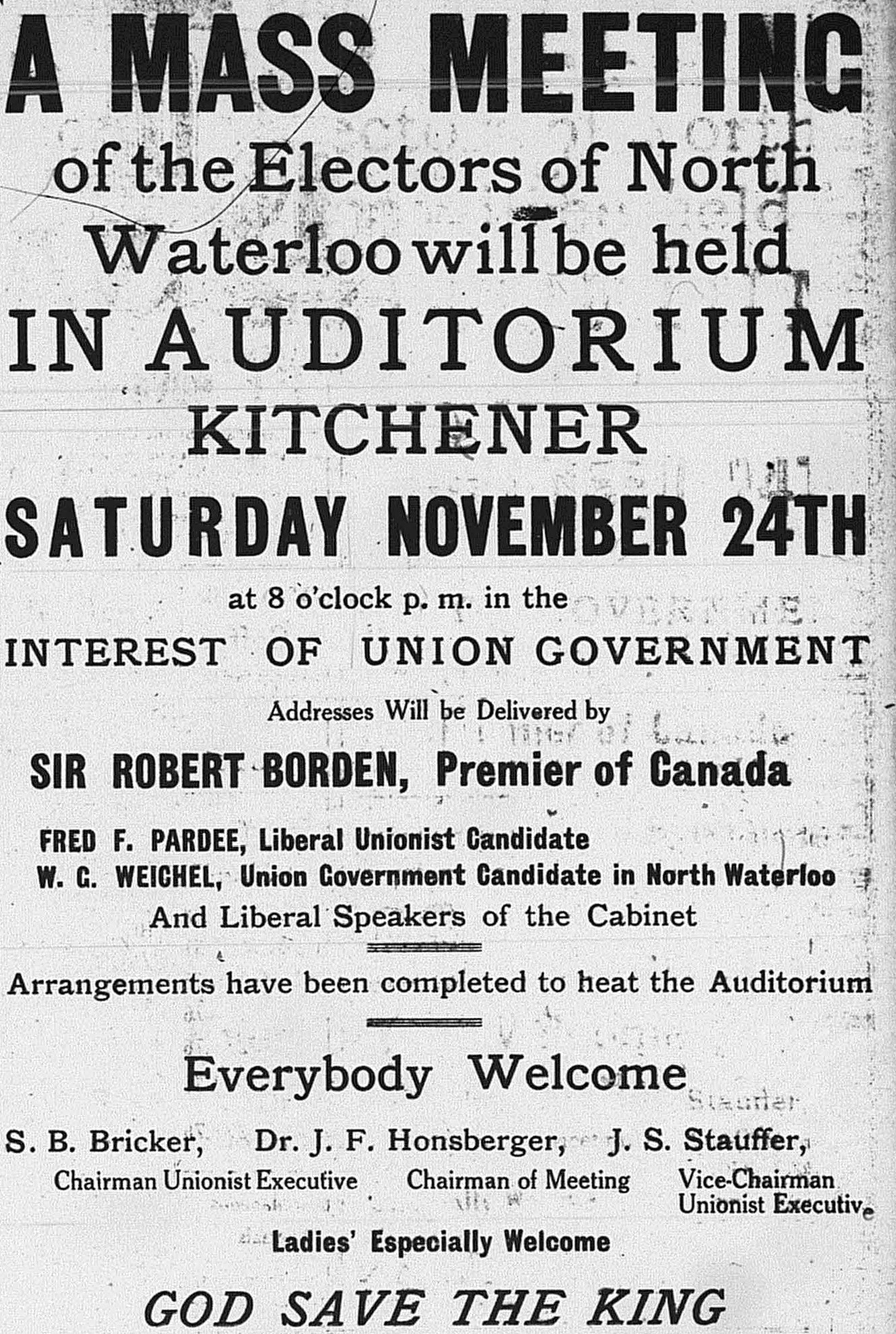 Borden’s Conservative government had raised tensions across Canada throughout 1917 by passing legislation such as the Military Service Act (which introduced conscription) and the Wartime Elections Act (which gave the vote to women with family military connections, but stripped it from conscientious objectors and citizens who had migrated to Canada from enemy nations within the previous 15 years). In the lead-up to the election, scheduled for December 17, the Conservatives and pro-conscription Liberals formed the Union Government, which depicted itself as representing the true patriotic spirit of (British) Canada by supporting the boys overseas. The remaining Liberals, led by Sir Wilfrid Laurier, feared that the rhetoric surrounding conscription and the accompanying demonization of its opponents, especially those in Quebec, would tear the country apart.

Patriotism had been a pressing issue in Kitchener since the outbreak of the First World War. Since roughly 1830, the community had been known as Berlin, but at the beginning of the conflict, businessmen nervous about losing customers successfully pushed for a plebiscite to rename the city — and on May 19, 1916, those in favour of the change won the vote by a slim margin. The campaign split the working-class German-Canadian population and British-Canadian professional class. When a slate of candidates who opposed the name change won the municipal election on New Year’s Day, 1917, “patriotic” citizens vandalized a newspaper office, and members of the 118th Battalion gathered menacingly outside the home of mayor-elect David Gross.

In the Kitchener riding of Waterloo North, the incumbent MP, W.G. Weichel, played the patriotic card for the Union side in the 1917 federal campaign, while former Berlin mayor W.D. Euler, representing the Liberals, contended that the government’s actions had led to “a nightmare of disregard for the public rights without parallel in Canada.”

Before the rally, around 200 banner-waving supporters of Euler and Laurier paraded along King Street. When a crowd of 6,000 flowed into the auditorium, 300 to 400 anti-Unionists split into three groups before taking positions in the galleries.

The heckling began immediately. When the chair of the event was shouted down, a military band tried to distract the crowd. One attendee held up a banner declaring Euler to be “the people’s candidate.” Toronto candidate H.M. Mowat attempted to lighten the mood, joking, “This is a most enjoyable meeting,” but the gambit flopped. As he tried to speak, several women in the audience shook their fists at the hecklers, yelling “Slackers!” and “White feathers!” — slurs used to denigrate those deemed cowards and traitors because they opposed conscription. Mowat quickly gave up. “Politics at the present time are all mixed up,” he said before sitting down. “We are all mixed up.”

After Mayor Gross pleaded for calm, Borden took the stage. He waited a few moments, hoping the crowd would compose itself. But when he opened his mouth, audience members began shouting “We want Laurier.”

“Whenever you get through,” the prime minister replied, “I am ready to begin.”

More insults were hurled his way. After making several attempts to explain his purpose in coming to Kitchener, Borden, too, gave up. There was, he declared, “an organized effort to prevent free speech here tonight, and I do not propose to waste my time trying to discuss these important issues under such circumstances.”

Mayor Gross again called for order. Weichel took the stage and, pointing to the press table, warned about the potential fallout. “What do we care?” yelled the hecklers.

The blowback was swift. Local papers thought the crowd’s treatment of Borden had been disgraceful and demanded that those responsible be punished (only three people were charged and fined). Elsewhere, editorials focused on the German background of many of the hecklers and called for harsher immigration policies; the Windsor Record called for the imposition of martial law.

On November 26, Kitchener City Council voted 7-5 against endorsing an apology that had been drafted by Unionists. The Kitchener Daily Telegraph felt the result was essentially an endorsement of the hecklers and declared that “as a piece of municipal folly this action of the Council is probably without equal in Canada’s municipal annals.”

Members of the local business community were livid. Companies from outside Kitchener that believed Borden had been treated unfairly were cancelling orders. Other communities threatened economic boycotts. The Kitchener Board of Trade endorsed the Unionists and demanded the resignation of the councillors who had voted against the apology. Communities in southern Waterloo County discussed the possibility of removing Kitchener as the county seat, or forming their own county.

The Board of Trade and local manufacturers’ organizations declared December 3 “Indignation Day.” Factories were closed. Large public meetings were held to show the loyalty of Kitchener’s citizens. The hope was that such demonstrations would encourage the entire city 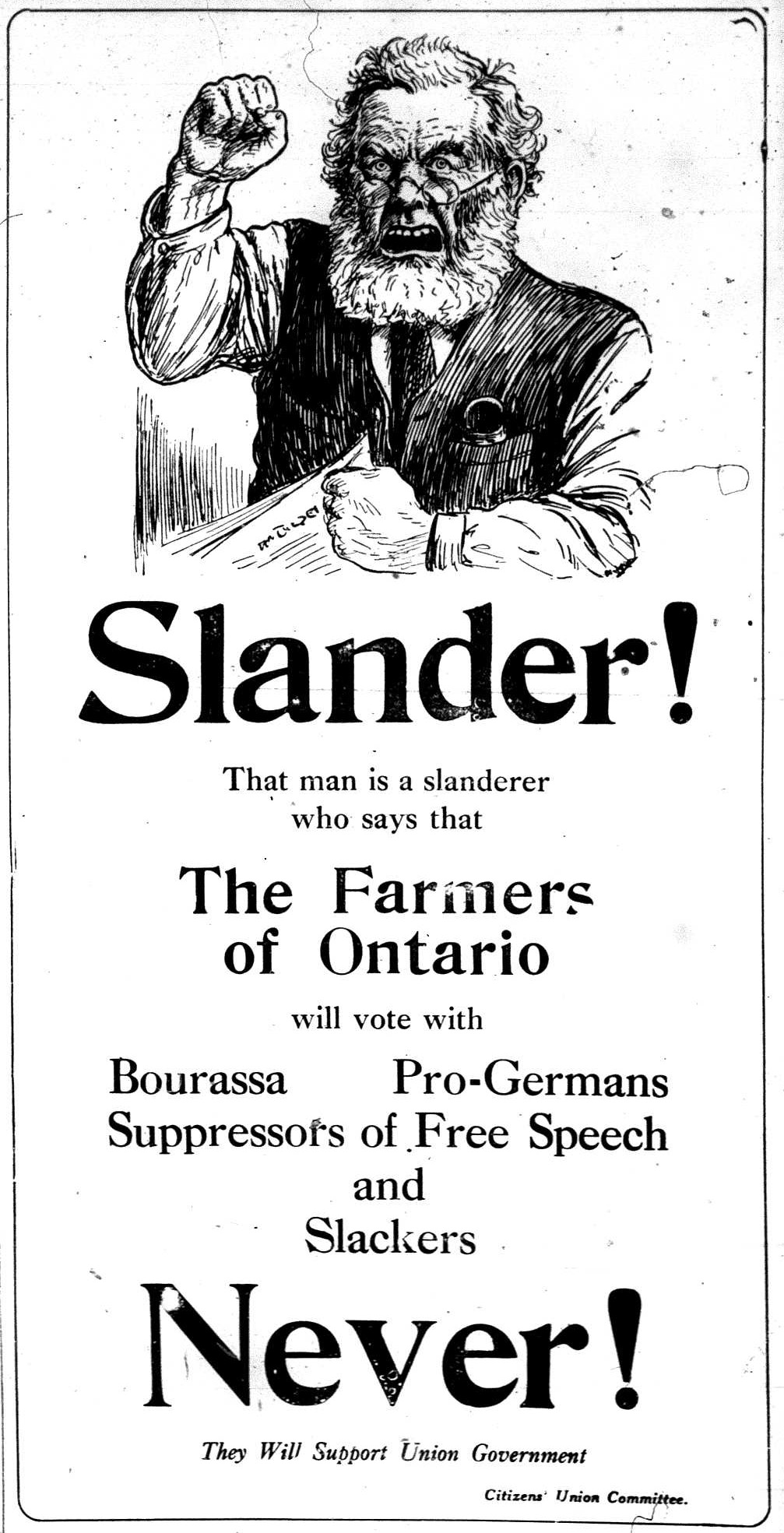 council to resign before more business was lost. While thousands gathered outside city hall, councillors unanimously passed a new apology to Borden and the rest of Canada.

Employers, trade organizations, and the press were squarely on the side of the Union:  the message they conveyed — through rallies, advertisements, and editorials — was that if voters opted for the Liberals, they’d usher in a regional economic apocalypse. Euler rarely received positive coverage. His rallies were barely mentioned in the press, while Union meetings in the tiniest towns in the riding were depicted as grand successes. A convert to Methodism, he returned to the Lutheran church when his character was attacked by his minister.

And yet, when the election was held on December 17, Euler emerged victorious, winning by nearly 2,400 votes on a day that saw 86 per cent turnout. Although the Unionists won 74 of Ontario’s 82 seats, their cause had failed in Waterloo North. During a victory parade that night, Euler’s supporters carried a coffin meant to represent either Weichel or the military. Weichel declared that the riding was “practically isolated from all English-speaking Canada.” One soldier claimed parade participants had spat on his uniform. “Your town is rotten to the core,” he told the Toronto Daily News. “I would line them up before a firing squad.”

Union supporters warned that the city had sealed its doom. Threats of economic boycotts resurfaced. City councils in Brantford and Guelph asked the province to remove the name Kitchener, feeling the election results dishonoured the British military hero the city was named after. (In a move that smacked of economic opportunism, they also indicated they would welcome businesses wishing to flee Kitchener.) The following year, after the federal government issued an edict banning German-language newspapers, the city’s Berliner Journal was shut down.

Euler continued to prosper: serving as MP until 1940, he held three cabinet posts under Kitchener native William Lyon Mackenzie King, then sat as a senator until his death in 1961. The Unionists held power until 1921, when they were swept away in the political realignments that followed the war.

One paper, at least, avoided the inflammatory rhetoric that characterized the editorials of its peers. On Christmas Eve, the Montreal Gazette, discussing the boycott threats, wrote that “perhaps it would be just as well to drop all nonsense. Even if some Canadians hate each other most savagely there is no profit and small satisfaction to be had in seeking to destroy a home community. There is an enemy over in Europe to fight and it will require the most strenuous exertion to defeat him. Domestic strife is just so much help to the foreign antagonist.”

Watch The Agenda with Steve Paikin tonight at 8 p.m. and 11 p.m., or live on Twitter or Facebook, for an interview with Patrice Dutil, author of Embattled Nation: Canada’s Wartime Election of 1917.

Society
The Grey Cup is returning to Hamilton. What’s the city’s game plan?
The last time the Steel City hosted, it was both a triumph and a disaster — but organizers have high hopes for this year’s festivities.
Steve Paikin