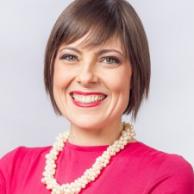 An award-winning multimedia producer and communicator, Ward has designed and activated several targeted campaigns and learning products that have contributed to the growth of cities around the world. Financial Times ranked her campaigns in the Top 5 for investment attraction three consecutive years and the Lieutenant Governor of Ontario, and the Government of Canada recognized her work for its role in supporting significant economic growth for Canadian cities.

Ward has partnered with municipal governments, private sector, and NGOs from 80 cities in 16 countries including Canada, Eastern Europe, Asia, and across the Caribbean to build their institutional knowledge, introduce e-governance, and lead digital transformation. Ward was given a Queen’s Diamond Jubilee Medal for her contribution to international development and has been recognized by her international peers through the Development Counsellors International Top 40 Economic Developers Under the Age of 40.

In addition to her professional achievements, Ward’s volunteer work includes promoting public-private-partnerships in sustainable infrastructure investments with the OECD/UN Global Compact Cities Program; being an active program committee member with the Economic Developers Council of Ontario; and in the past serving on the boards of Museum London and Downtown London.

Passionate about community development, Ward has built her career on collaboration, partnerships, and foresight to plan and promote long-term sustainable growth that supports communities, leaving a positive legacy for future generations to enjoy.